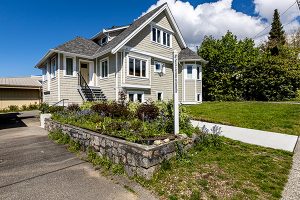 Curtis was a partner in the architectural firm Honeyman & Curtis, which was established in Vancouver in 1902, and completed a number of prestigious commissions for the provincial government, the Canadian Pacific Railway (CPR), and churches for a variety of denominations before the Great Depression in 1929. The residence features a blend of Craftsman and Tudor Revival design elements, which was a popular style in the 1920s on the North Shore

Architect George Curtis designed this well-preserved residence for Rupert Archibald (1853-1936) and his wife Margaret (née Beaumont, 1861-1948). Rupert was a master mariner and owner of the Stoker Farm on Lonsdale Avenue, just south of 29th Street. Constructed in 1921, the Archibald Residence was later owned by Dr. Harold Dyer (1875-1963), who was the local coroner, and his wife Muriel Beatrice (née Underhill, 1886-1979). In the 1950s, it was purchased by Holy Trinity Church to serve as a convent to house the Sisters of St. Joseph, who were the teaching training staff of the Holy Trinity Elementary School.